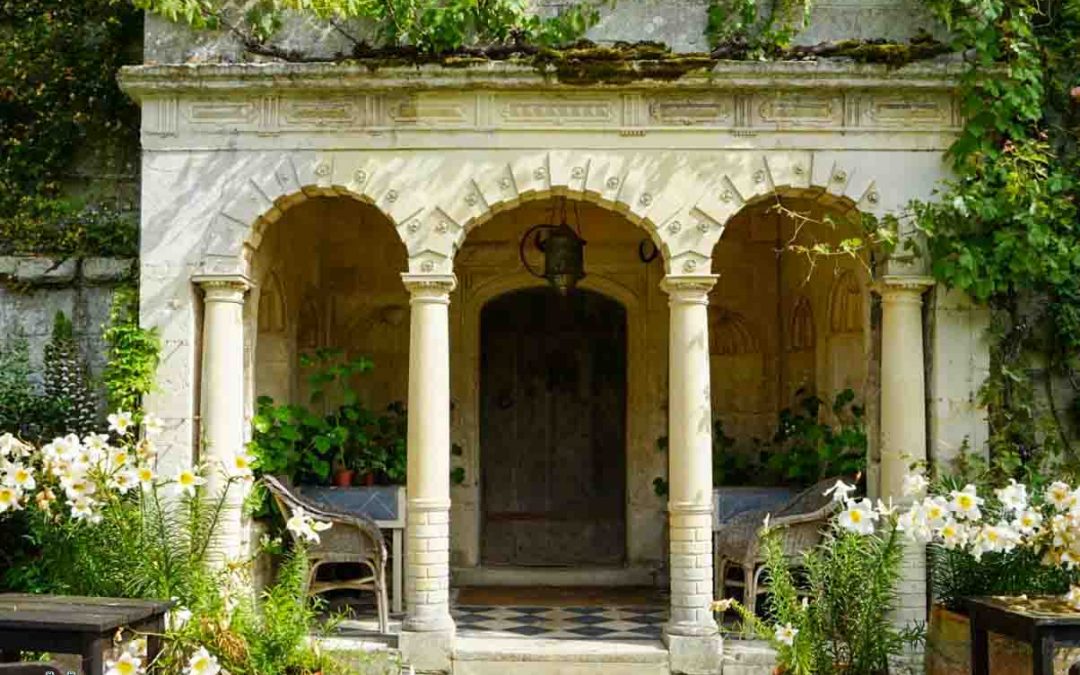 On the south front of Cranborne Manor House is a delightful and compact early 17th C loggia. It is centred as the main entrance (the far west wing being added later) and positioned between the 13th C stair turret and buttress. There are 3 rusticated arches with what appears like compact petalled flowers (maybe roses), on alternate voussoirs. There are 4 Roman-Doric columns that are rusticated on the lower part of the shaft. There is a classical carved entablature.

It is curiously different from the north loggia. They both have 3 arches and in the loggias are shell-headed niches at a level for sitting on. However, the north loggia is larger and the decorative features on the arches, entablature and columns are very different. The north loggia shows off strap work, gargoyles and delicate anthemion (honeysuckle – resembles petals) carving on the arches. There is drama, staging and status (with the coat of arms) and elaboration. Whilst the south loggia is smaller, prettily rusticated and intimate. On the upper storey of the south loggia is a small room with a single 3-light mullioned window. Shell-headed niches have been placed either side of the window with a modillion cornice above. The battlements have rounded merlons. In the central merlons are carvings of 2 signs of the zodiac. Virgo is in the right merlon and the sign for Libra in the left. The carving of Virgo is of a woman holding a sheaf of wheat or ear of grain. She possibly represents Virgo as the Roman Goddess Ceres (Greek equivalent is Demeter) the goddess of fertility and plenty. For Libra, the carving is of scales.

There is a circular recess below the window on the upper storey. This may have contained an emblem or carving which has long gone, but I cannot ascertain any evidence. In the image from Mansions of England In the Olden Time (1841) by Joseph Nash the image of Virgo as in the merlon appears in the circular recess below the window.  This may have been the case, or it was just a convenient image for the painting. The window in Nash’s image appears smaller and with only 2 lights as opposed to the actual 3 as seen in the photograph above. Also there seems to be a figure in the Libra circular recess rather than just the scales. 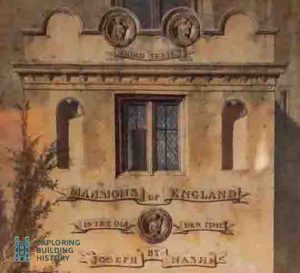 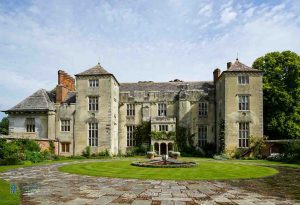 There are further circular recesses on the external walls of the house on the south side beneath the first-floor windows. There are 10 of them and they are plain with no decoration in them. The RCHME (Royal Commission on Historical Monuments of England) survey on Cranborne speculates that they may have been designed to contain the other signs of the zodiac. They may have formerly contained such carvings, which have been removed but again, I cannot ascertain any evidence. There are similar empty circular recesses at Montacute House in Somerset (another William Arnold building). However, I believe there are only 9 there – although I will check the number out, next time I visit Montacute.

The zodiac signs, if that is what was intended, would need to read from the right-hand side of the house to left in order to make sense of the order – i.e. Libra comes after Virgo in the zodiac year. It also could be they are placed east to west. If reading the from left to right (starting on the 1st circular recess on the west/left wing), the signs would be in the order of:

I wonder about the position of astrology in the late Tudor and early-Stuart period. Shakespeare sends us rather mixed messages when his characters refer to the stars. We all know of Romeo and Juliet being ‘star-crossed lovers’. In King Lear (circa1606), Shakespeare explores a theme (amongst many other themes such as love, power, loyalty, self-awareness, madness, loss, etc.) of whether belief in the stars, in determining character and destiny, is rational or not.

In Act I, Scene II of King Lear the setting is the Earl of Gloucester’s castle. Gloucester is speaking with his illegitimate son, Edmund. He is lamenting the perceived disloyalty of his legitimate son Edgar and blames the celestial bodies:

These late eclipses in the sun and moon portend no good to us.
(Shakespeare, King Lear, p. 19)

Gloucester exits and Edmund (the actual no-good son) muses to himself:

This is the excellent foppery of the world, that,
when we are sick in fortune, – often the surfeit
of our own behaviour, – we make guilty of our
disasters the sun, the moon, and the stars:
as if we were villains by necessity;
fools by heavenly compulsion;
(Shakespeare, King Lear, p. 19)

Later in the play at a camp near Dover, Kent is speaking with a gentleman about the departure of the King of France and the reaction of Cordelia over recent events (Act IV, Scene III). Kent reflects:

It is the stars,
The stars above us, govern our conditions;
(Shakespeare, King Lear, p. 99)

King James I of England and VI of Scotland believed witchcraft to be a real threat to his kingdoms. He became King of England in 1603. In 1597 he published a book Daemonologie to identify and categorise magical beings and practices. He specifies what is lawful or unlawful in terms of Christian Law. He does review astrology. Initially he defines astronomy as being a rational law of the stars and part of Mathematics, and therefore lawful. Astrology he splits into two sets of practices. It is lawful if moderately applied to observing and relating the seasons and weather. If, however, it is used to divine fortunes or make predictions then it against natural reason, unlawful and part of the ‘devil’s schole’. (King James, Daemonologie, p. 13)

I wonder if the incomplete Zodiac signs at Cranborne are to satisfy James as he visited Cranborne a number of times. Also, I wonder if the reading of the signs from right to left provides astrology with an approved rationality. Placing them from left to right could be seen as sinister (left – sinistra in Latin) and perhaps evoking magical practice.

The 2 signs that are present, Virgo and Libra represent the months of August, September and October, which are good months for hunting. James’s visits were always in the month of August. Nash’s image of the loggia shows a mid-17thC scene. The door to the house is open and the door of the north loggia is also open. Through the screens passage a column of the north loggia is visible. I find the servant on the left-hand side of the picture intriguing. He is wearing some sort of frame upon which hunting falcons are perched. The scene in Nash’s painting shows the ladies out of the sun in the loggia. I imagine the men are getting ready to leave for hunting. Dogs, horses and birds are ready. The men will ride away from the loggia, across the courtyard and out through the gatehouse to Cranborne Chase. In my next blog post on Cranborne Manor House I will be examining the gatehouse.