On a recent visit to Tewkesbury Abbey, I was struck by the carvings of individual faces from the 14th C. The abbey had an upgrade in the 1320-1350 period, which is likely when the faces were carved. These are faces from over 670 years ago. What were the times they lived in? This post looks at the context of the 14th C in England.

At times in the 14th C, it must have felt to the population of England that the country was being visited by the Four Horsemen of the Apocalypse: War, Death, Famine and Conquest (sometimes invoking Pestilence). And yet it was a time of artistic flourishing, individual thinking, and social change. Around 1300 what is known as the ‘Little Ice Age’ began to occur. During the 11th and 12th Cs there had been relatively warm and consistent weather. Vines could be grown with success in England. This began to change in the 2nd half of the 13th C and from 1300 balmy summers were no longer the norm. The first occurrence of the Thames freezing over was in 1309.

The problem was that the weather became unsettled and unpredictable. In the years 1315 and 1316 there was perpetual rain. People didn’t know what was happening. God oversaw the weather and God seemed to be displeased.

Far away from England there were significant volcano eruptions and a growth in Atlantic pack ice. The effect was swings between hot and cold weather. Coastal erosion was a common occurrence. Large, natural bars of shingle and sand began to change. At Spurnhead Bite in the Humber Estuary the whole town of Ravenser Odd disappeared. This has been a significant and prosperous port and market with its own charter. Founded in the mid-13th C it had been built on sandbanks. These then began to shift and after a winter storm of 1356-57 the town was abandoned. The storm cyclone, known as St Marcellus’s Flood, hit the British Isles around the 16 January 1362 (St Marcellus’s feast day) and destroyed what was left of Ravenser Odd. It is now submerged.

By the early 14th C, the River Frome at Wareham in Dorset had become silted up. This made it difficult for ships to come up the navigable river from Poole Harbour. Its significance as a trade port diminished and the new port of Poole developed.

The population of England peaked around 1300 and then a decline set in. Between 1315 to 1320 there was a big fall in population. The harvests had failed due to wet summers, which was followed by livestock epidemics. The crisis, known as The Great Famine of 1315-1317, devastated the British Isles and Europe. Recovery from it took until 1322.

The land also was becoming worn out by lack of crop rotation.

In June 1348 a ship from Gascony landed at Melcombe Regis, Weymouth in Dorset. A seaman came ashore and with him the Black Death – he was the first recorded case in England. Within the year the plague had swept the country. It may have wiped out over 50 percent of the population of England. From Melcombe Regis the routes would have been: (1) further round the coast by ship, (b) the road northwards through Bristol and Gloucester, (2) the road eastwards through Salisbury, Winchester and onto London, (4) the road westwards to Exeter. It is likely that the plague arrived in other busy ports but there is no record. By December 1349 it had run its course and was dying down.

It was the poor people, and the clergy suffered the most. The wealthy had the means to isolate themselves. Although once it got in to a household it would be devastating. It also meant that a whole cycle of agriculture was lost from 1349 to 1350.

From 1321 to 1326 England fell into civil war. The tensions between the barons and Edward II and his favourites broke out into conflict. In 1312 a group of powerful barons captured and executed Edward’s particular favourite, Piers Gaveston. The strife between Edward and his wife Isabella also grew into conflict. She aligned herself with Roger Mortimer. In 1327 Edward was forced by his opposing barons to abdicate in favour of his son Edward III. On the 21 September 1327 Edward II died at Berkeley Castle. How he died is an ongoing historical debate!

Besides the internal strife of the country there was also conflict with France and Scotland. Edward II’s forces were decisively defeated at the Battle of Bannockburn in 1314. By 1337, Edward III was embroiled a war with France that would ultimately end in 1453 – The Hundred Years’ War. England could then carry on with its own civil war – The Wars of the Roses (1455-1487).

Out of the chaos and traumatic events of the 14th C people carried on and a new world emerged. The Black Death accelerated the move to a money economy. The wealthy merchants in towns, cities and ports became an increasingly wealthy class. The wool and woollen cloth industry was a significant part of the economy of England. Towns and ports grew as migration took place from the countryside to seek opportunities.

The agrarian economy and the feudal system of the previous centuries was now challenged. In 1381 an uprising now named the Peasants’ Revolt took place. The tensions were triggered by higher taxation and disruption between labourers and landowners. Labour had been in short supply following the human cost of the Black Death. Landowners wanted a peasant class they could control and subordinate to work. With demand outstripping supply, labourers could let go of the yoke of feudalism and begin to seek other opportunities.

Colleges at Oxford and Cambridge had been established for around 100 years. But in the 14th C individual thinkers and philosophers emerged and had a popularity. Men such as Duns Scotus (d. 1308), John Lutterell (d. 1335) and William of Ockham (d. 1347). John Wycliffe (d. 1384) initiated the Lollard movement, a pre runner to Protestantism. Oxford and Cambridge were universities that could educate and enable individual thinkers.

ENGLISH LITERATURE GETS A VOICE

Significant works of English Literature appeared in the latter half the 14th C. Works such as William Langland’s (d. circa 1386) Piers Plowman (c. 1370-90) and the works of Geoffrey Chaucer (d. 1400). The Canterbury Tales dates from 1387 to 1400. Sir Gawain and the Green Knight dates from the late 14th C. Whilst it would not be until 1476 for the printing press to be introduced into England by William Caxton, these written works in Middle English were secular works in the vernacular. Latin and Norman French had dominated the written word.

Architecture flourished during the 14th C. The transition from the Decorated Gothic towards the English Perpendicular Gothic took place during the middle of the century. Greater feats of engineering enabled taller ecclesiastical buildings with large windows. A workforce depleted by the plague in the middle of century somehow recovered to continue great works of design. Below are some examples of ecclesiastical architecture from the 14th C:

In February 1322 the Norman central crossing tower at Ely collapsed. A unique solution was created, namely the Octagon or Lantern, overseen by Alan of Walsingham (d. 1364). A mixture of stone and wood, the whole construction was a not only a beautiful solution but a feat of engineering. The master carpenter for the lantern tower was William Hurley (d. 1354). 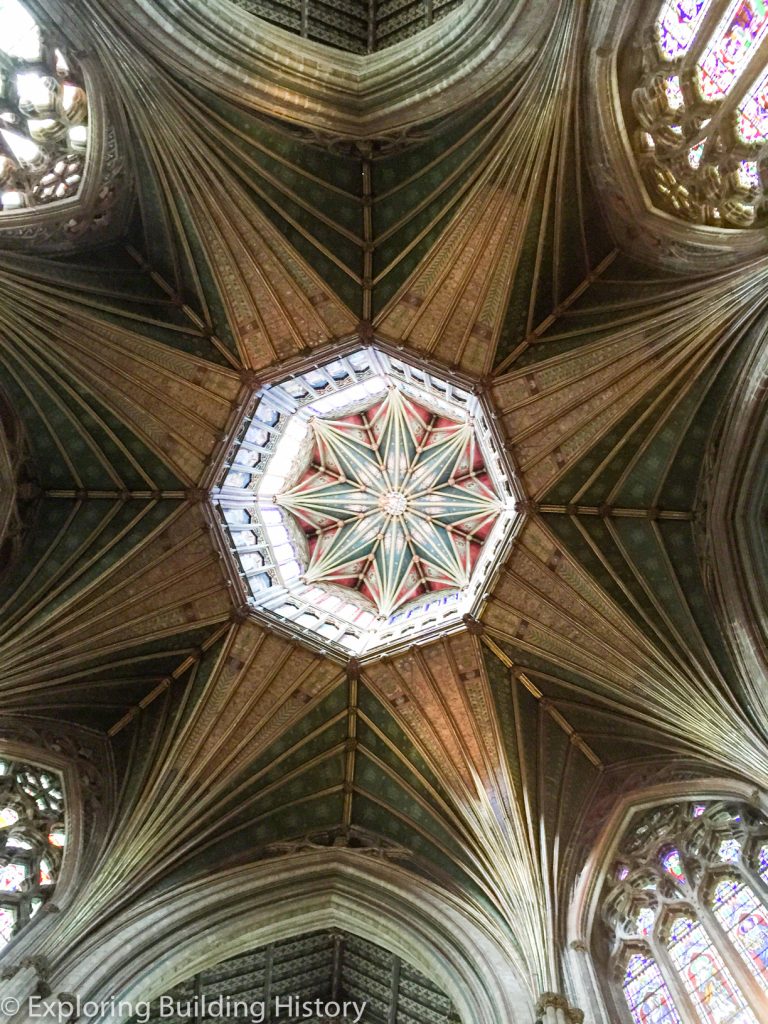 Edward II’s tomb in Gloucester Cathedral (prior to the Dissolution it was a Benedictine Abbey) was commissioned by his son, Edward III, and dates from circa 1330s. The stone is a combination of an alabaster effigy and what looks like a pale and darker marble/limestone. It was visited by Richard II in 1378. The pillar capitals on either side have the White Hart painted on them – the emblem of Richard II. An elaborate Decorated-Gothic tomb. Although the elaboration of soaring pinnacles and arches is leading towards the Perpendicular Gothic which starts to appear in England during later 1330s. 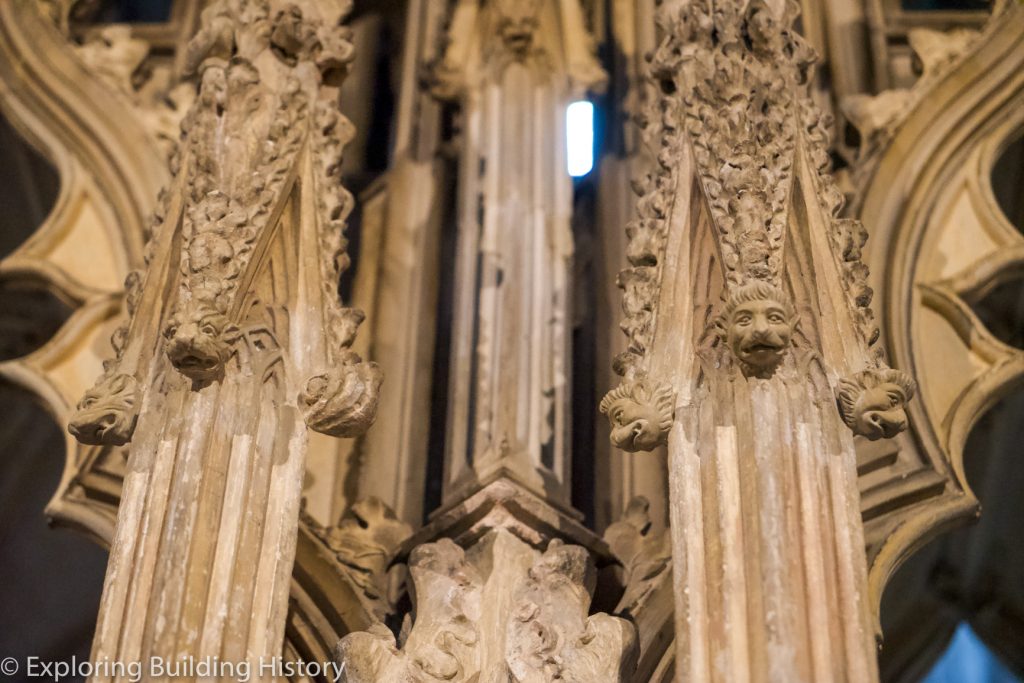 Detail of the Tomb 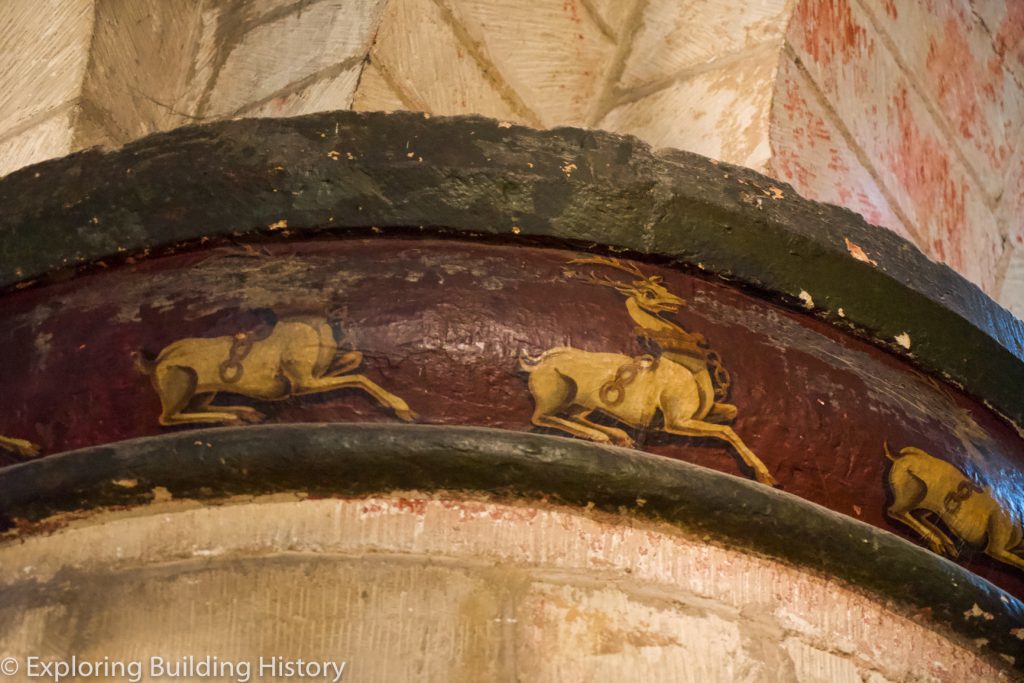 In the 2nd half of the 14th C the Perpendicular-Gothic west front at Winchester Cathedral was built. Bishop Edington (d. 1366) in 1346 had the Norman west front demolished and a new one started to be built in the latest magnificent style. He also started the remodelling of the nave, which was carried on by Bishop Wykeham (d. 1404) with his master mason William Wynford (fl. 1360-1405). 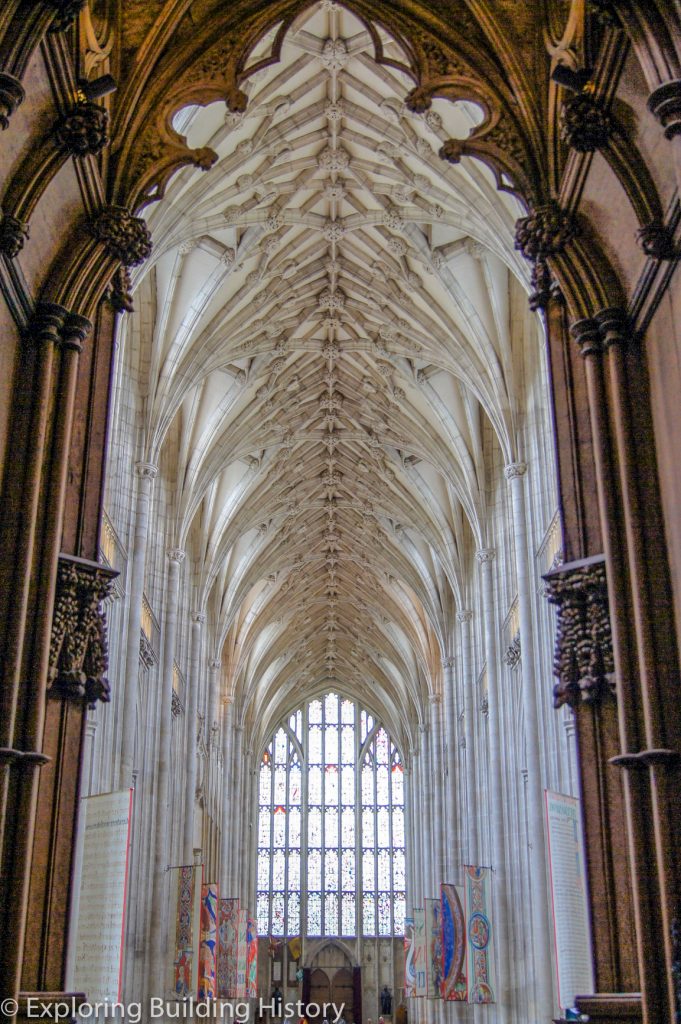 Magnificent soaring nave of Winchester Cathedral looking towards the west window. The stone vault was embellished with a masterpiece of elaborate lierne vaulting.

In the late-14th C the glorious cloisters with magnificent fan vaulting at Gloucester were started.

PEOPLE OF THE MID-14th CENTURY

In Tewkesbury Abbey in the nave, aisles and chancel faces peek out at us. Potentially these were carved between 1320 to 1350 when the nave was remodelled. The individuality of the faces suggests they are from real-life people. Faces of people from 670 years ago. They have a timeless familiarity. There are kings, queens, ladies, lords and knights, along with men and women of the church. Maybe some of them are merchants, lawyers, clerks, or doctors. These people and their families experienced the ravages and uncertainties of the first half the 14th C. And yet there can be found serenity, pathos, cheerfulness, thought and hope in the individual faces. Perhaps they were doners that contributed to the remodelling and maintenance of Tewkesbury. The lack of morbidity suggests that they were possibly carved before the Black Death hit.

The faces need seeking out. One can be seen on right of the photograph attached to the capital of a Norman column. 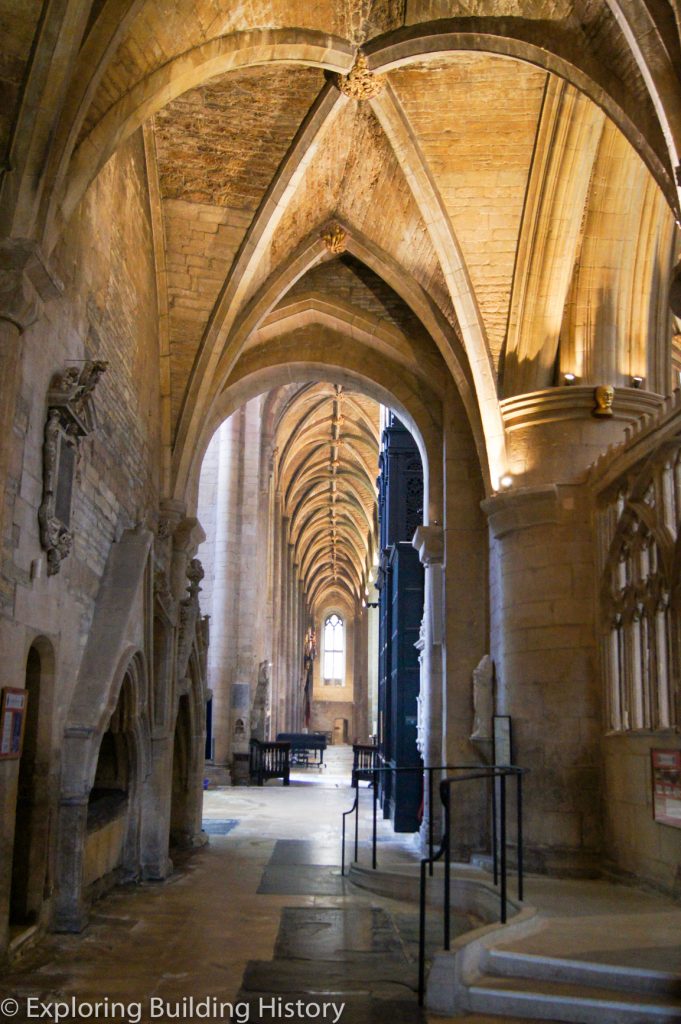 In the chancel of Tewkesbury amongst the springers and vaulting faces peek out. These ones have been restored with red, blue, and gold colours. 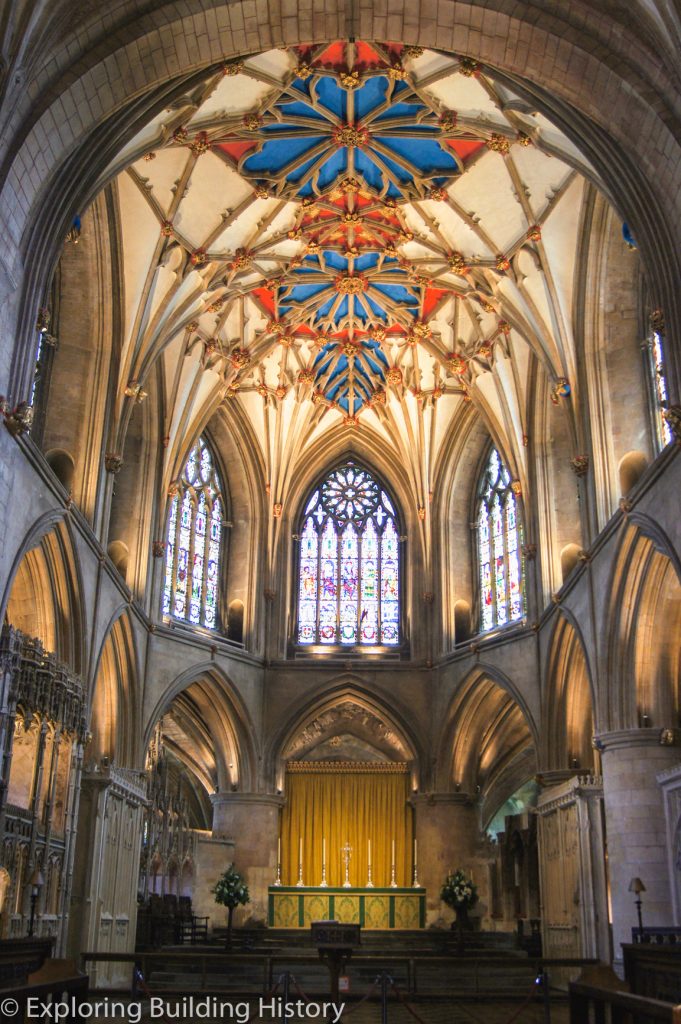 The 14th C is a testimony to human survival through catastrophic events. Somehow England kept going to forge forward with building its wealth, economy, social structure along with its feats of architecture, engineering, and artistic expression. The faces at Tewkesbury are those who once thrived and left their curious legacy. It is tantalising to not know more about them!