A few days ago, there was a great scrabbling in the garden. I rushed out to discover the dog had captured and dispatched a pigeon. Whilst upset at the demise of the poor bird (the dog was very pleased with himself), I was reminded of the great legacy of pigeon houses in this country. This pigeon may have been a feral descendant of the domestic bird that was bred to inhabit these pigeon houses. I don’t think it was a wood pigeon.

In this post and the next post, I want to concentrate on them as a feature of the manor house. There are some great pigeon houses from monasteries, which I will leave to examine at a later date. I also need to address the naming of the building-type. ‘Dovecote’ is a relatively recent term. They were traditionally known as ‘pigeon houses’ or ‘dove houses’.

The late John McCann, along with his wife Pamela, produced a wealth of research on the pigeon house. He wrote:

‘The function of a traditional dovecote was to produce a luxurious form of meat by exploiting the natural breeding behaviour of what were essentially wild creatures.’

What was this natural breeding behaviour? The wild pigeons or rock doves (Columba livia), from which the domestic pigeons are descended, inhabit sea cliffs and use caves or niches to nest. They are frequent breeders, producing 4 to 8 clutches of eggs a year. Each clutch produces one female and one male bird. Both parents look after the young, which are called squabs.

The pigeon house building is essentially a reproduced cliff face with ledges and dark niches for nesting. The pigeons raised their young until they were almost as large as the adults. Just as they became fledglings, the pigeon-keeper would then wring their necks. As their flight muscles had not been developed, their meat was very tender and could be roasted on an open fire. There is no evidence to suggest that the eggs were used as food. Keeping them for hatching provided valuable meat. 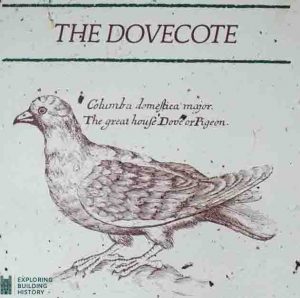 The other prized commodity from the pigeon house was the manure. It was normal practice to allow the manure to build up throughout the summer and ‘harvest’ it in the winter (this avoids disturbing the nesting birds). Pigeon manure was thought to be very fertile.

The main breeding season in pigeon houses was from March to October. According to household accounts pigeon meat provided a significant part of their owners’ diet from the end of Lent until early November (the main season being August, September and October). It was not a winter meat as sometimes claimed. The birds were not breeding throughout the winter.

Pigeon houses were important buildings, demonstrating status and effectively a granted licence to eat from a socially-limited food source. From the Norman period they were restricted to lords of the manor. In the later medieval period and, particularly in the 16thC, the rise of gentry produced a new wave of ‘lords of the manor’.

The pigeon house at Palmer’s Farm was built next to the house and by the road. It was meant to be seen. The barns and other farm buildings are to the rear and not so visible. Whilst described as a farmhouse, it must have been a wealthy one with important status to have a large pigeon house. Besides being a very visible building, another consideration for siting was noise. Sudden noises could alarm the pigeons (an example would be the watermill). The art of pigeon keeping is to create the conditions that keep them in their house and not fly off to find a better nesting site.

Often a louver, sited at the apex or top of the roof of a pigeon house, allowed pigeons to leave and enter in safety. They needed to go and forage for food. The louver needed to be designed to stop birds of prey landing and entering. Few original louvers survive. The opening on the roof at Palmer’s Farm looks more like a bell cupola than a louver. Possible it is missing the wooden strips of a louver. From the 18thC game keepers were relentlessly destroying birds of prey, so that their threat level became minimal. This meant that louvers became more about a pleasing design than protection. 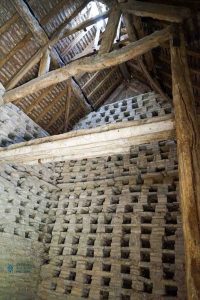 Figure 4: At Palmer’s Farm there are 657 nesting holes. Notice the queen post truss timber of the roof – enabling a wider span that a king post truss. The central beam may have supported an upper floor.

Rats were not really a predatory problem until the arrival of the brown rat in England in the early 18thC. This rat (Rattus norvegicus) came via the Baltic ports on shipping and became a serious problem as they would gnaw and tunnel into pigeon houses. Prior to this there was just the black rat (Rattus rattus), which had been around in Britain since the late Roman period. The black rat’s preferred diet was fruit and grain and no real threat to the pigeon population and their eggs.

Pigeons did need to have their natural feeding pattern of seeds supplemented over winter and after harvest. The pigeons also needed mineral supplements such as salt, calcium and grit. By the 18thC the requirement of the mix had been worked out. Prior to that a ‘salt-cat’ was hung in the pigeon house for them to peck at. This preparation was made from rather disgusting ingredients. Early descriptions of the ‘salt-cat’ suggested they were imbued with charms to ward off predators. If there were no mineral supplements available, the pigeons would start to peck at the lime mortar in buildings.

The four-legged predators of the medieval period were likely to be polecats, feral cats, stoats and foxes. Some dovecotes had water-filled moats to keep out such predators. I would like to add cocker spaniels to the predator list, based on my recent experience!